The Highlights and New Showbie Features Announced at BETT 2016

BETT 2016 has officially wrapped up and we wanted to share some of the highlights, including a sneak peek at the newest features the Showbie team is working on. 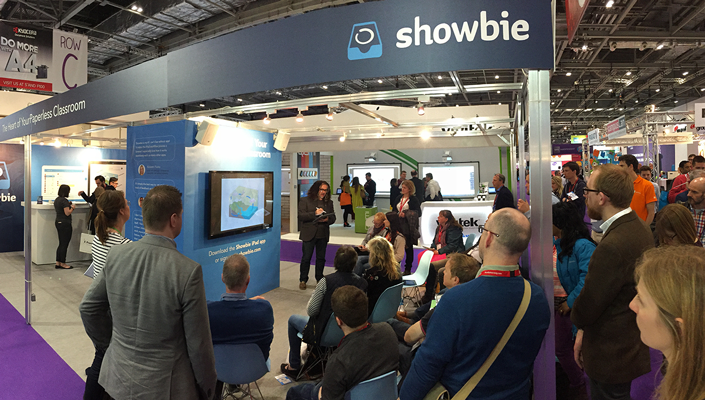 Joe Moretti did a fantastic job at Showbie’s booth presenting on topics like Showbie Pro’s newest features (gradebook, portfolio and parent access), and made a huge impact when he announced what’s coming soon to Showbie.

To spare you the suspense, he announced that we’ll soon be introducing a hotly requested feature that many of you have been asking for — classroom discussions!

In addition to class discussions, you’ll also soon be able to copy files with annotations between Showbie folders, another highly requested feature we’re exciting about introducing later this spring.

At #BETT2016 @Bett_show , @Joe_Moretti teases the future of Peer Assessment in Showbie with Copying Files pic.twitter.com/nfSKWhZna1

We also want to send a special shout out to Abdul Chohan, Andrew Rhodes, Greg Hughes and Catherine Jassey for their fantastic and informative presentations.

Another segment of Joe’s presentation that made a big impact at BETT was our paperless calculator. You can find out how much your school can save by going paperless with Showbie by adjusting the sliders for each field:

A few of the more fun highlights from the BETT Showbie team include meeting Sir Ian McKellan in his favourite local pub, hosting our own Showbie pub night, and having the opportunity to meet so many of you all in person!

@Showbie #bett2016 @Bett_show pub night!! What did you do Friday night? pic.twitter.com/dbHc2fQA1x

And that’s a wrap! We’re off to TCEA in Texas next week, and we hope we get to see even more of you at Bett 2017 next year!

Join The Showbie Team and ADE Joe Moretti at Bett 2016

Continuing on our tour of global education technology conferences, Showbie is…

Join the Showbie Team at FETC in Orlando, Florida!

Showbie will be attending FETC 2016 in Orlando, Florida next week on January…

Introducing Digital Portfolios for Everyone