New to Showbie? Just Give it a Go 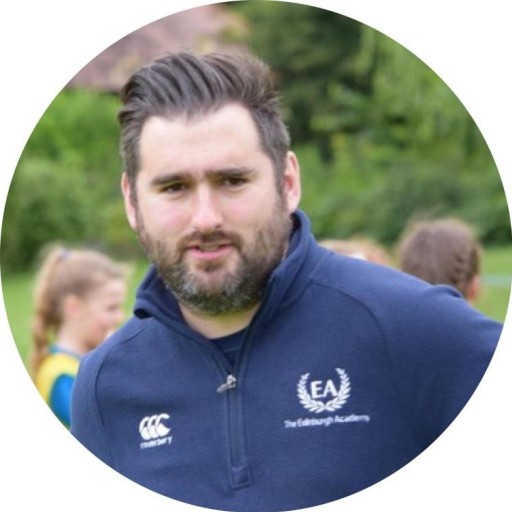 Martin Willis is an Apple Distinguished Educator and was appointed to the position of Head of e-Learning at the Edinburgh Academy in 2015.

The Edinburgh Academy is an independent day school in the heart of central Scotland. They are a 1:1 iPad school and are in their fourth academic year of their deployment project.

This content has been re-posted with permission by Martin Willis, Apple Distinguished Educator, Showbie Champion, and Head of e-Learning at The Edinburgh Academy, who’s been leading his school’s Showbie integration. He shares his “just jump” advice for teachers just getting started with Showbie.

We have been using Showbie for a few years now and it is a firm favourite with staff who have experience working with iPads. However every year I find myself running a workshop for new staff and staff who are new to an iPad deployment stage. I would plan extravagant presentations, trying to encourage staff to use Showbie to organise their classrooms. Teachers often found it confusing and I would tell them that it really isn’t that complicated and to just ‘give it a go’ – Showbie really is an app you just need to play with.

I decided that my approach perhaps wasn’t terribly helpful, so this year I took a different tact.

I called on Eric, our Customer Success Lead at Showbie who kindly offered to host a web cast… despite the significant time difference. I used this as the centrepiece of an in-service session focusing on feedback. Instantly, I could feel that staff ‘getting it’. They saw the benefits and how much time they could save, whilst offering quality feedback.

Within days of the start of term, I was hearing about great things that staff were doing with Showbie. Teachers were providing great feedback and encouraging pupils to look again at some key areas of learning, they were getting the children to use the class discussion feature to collaborate and share ideas… we even had one teacher dressing up and getting his pupils to describe his outfit using the annotation tools. 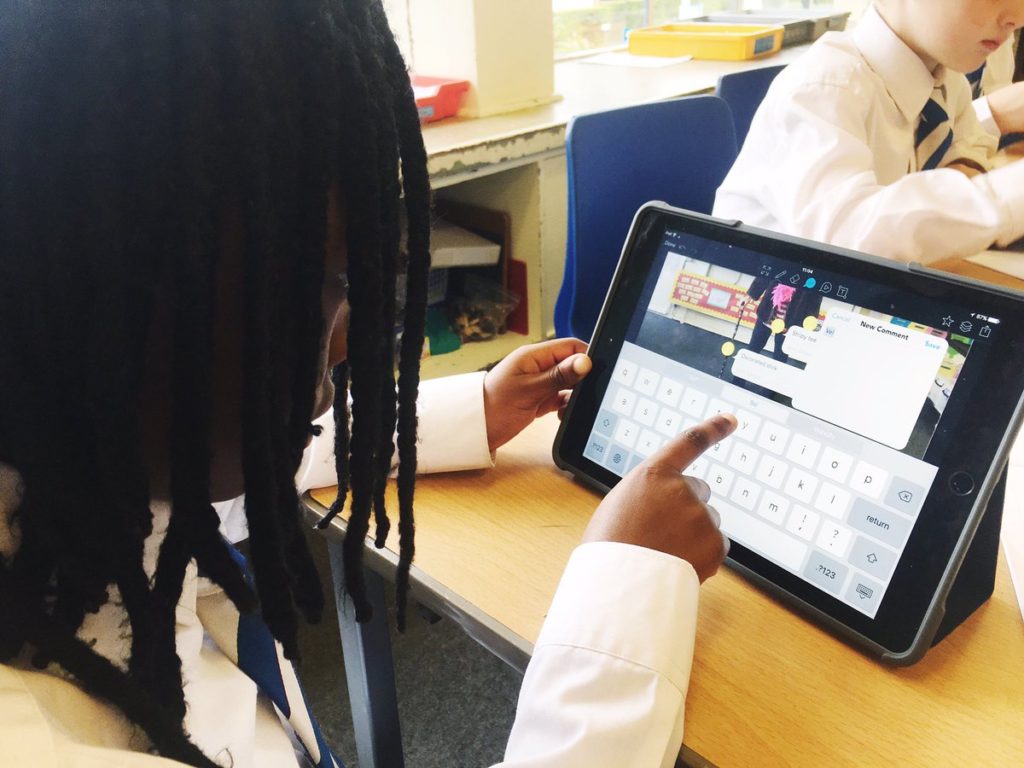 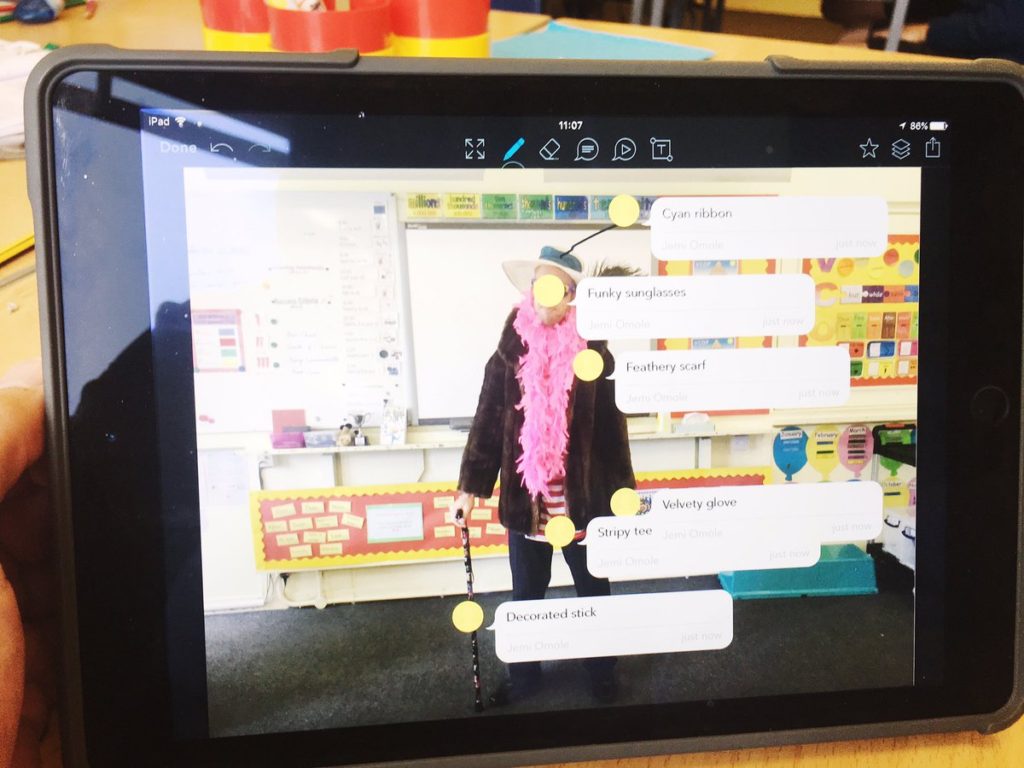 Now, none of these were new lesson ideas or features of quality Teaching and Learning that teachers hadn’t been doing before, but what was new was how quickly teachers were adopting this entirely new way of organising their classrooms and indeed learners.Teachers were no longer relying on me, as a project lead, coming into class and demonstrating or even team teaching. They were willing to take a risk and give it a go. This is critical to the success of our 1:1 deployment and is why children adopt increased use of technology so quickly. They aren’t scared of making mistakes – they see it as ‘debugging’, an opportunity to learn from mistakes and trying again. The fact that our teachers are starting to think this way is huge! It has taken us four years, but we are now there… and Showbie has been a huge part in our success.

The answer is in Showbie’s simplicity as well as its comprehensive approach to classroom management. Staff trust it and are confident in its reliability.

But at the start of a school year – I wanted to highlight how Showbie has been such an important aspect of our deployment program. It does so much more than impact classroom practice.

With the upcoming release of iOS11, we took the opportunity this year to stagger our device deployment this year. Pupils who were providing their own device for the first time were asked to hold off bringing their iPad to school for setup. This meant that once we were ready to receive their new devices, we had to back up the work they had done in the first six weeks of term (they were given school devices to use in the meantime). The main priority was making sure that the children’s Book Creator work was safe. Rather than introducing the concept of saving to OneDrive at the start of term… which was a rather traumatic thought as we had difficulties with authentication in OneDrive at the time, we turned to Showbie for a solution. Teachers were able to create a back-up assignment and as pupils are so comfortable with using Showbie, work could be saved there for easy download once using their new devices.

Staff training has also been organised using Showbie. Staff have enjoyed using an app that they are familiar with and the class discussion feature made our sessions more collaborative and reflective than they would otherwise have been. As a school we are in the process of completing an application for Apple Distinguished Schools status and so being able to make our training process transparent and easy to replicate, ensuring consistency in our approach to training staff in preparation for using iPads in their classrooms.

So what’s next? What can we accomplish next using Showbie? Well my Head Teacher came to me just yesterday with a theoretical proposition. Could we offer remote learning, supporting a family of three children for an entire school year? Of course, Showbie is my obvious solution. But how realistic is it to ask class teachers to organise and maintain their Showbie accounts to the extent whereby a child who hasn’t entered their classroom or met them face to face, could complete a school year and receive a formal written report which analyses and accurately describes their academic progress?

The honest truth is, I am not sure – but as it seems to be the theme of our Showbie integration, I am willing to give it a go! I want to see if we can make planning documents and resources available to this family via Showbie. It will rely on a bit of home-schooling, but then will hopefully encourage the teacher to provide all feedback through Showbie and therefore do the same for the rest of his / her class too rather than employing two different approaches to marking.

Will it work? We will wait and see… perhaps that will be the focus for another blog post towards the end of the academic session!

How to Get Parents On Board With Their Children’s…

Found a great new app for your classroom but parent participation is low? Try…

Use Technology to Bring the 4Cs into Your Classroom

The 4Cs (communication, critical thinking, collaboration, and creativity) are…